No products in the cart.

THE REBEL YELL OF THE MIDDLE CHILD. FED A STEADY DIET OF SUPER-TECH CLIMBS. THE SB130 WAS BUILT TO CRUSH THE BIGGEST TERRAIN. NO TRAIL “TOO” ANYTHING. POINT IT UP OR DOWN. ENTER A LAST-MINUTE ENDURO JUST FOR THE EFF OF IT. WE SAY NO ONE BIKE CAN RULE ALL. BUT THE SB130? ONE BIKE THAT RULES.

The previous bike I was riding had great pedalling characteristics and minimal to no pedal bob so jumping on the Yeti SB130 I didn’t expect to be impressed yet, I was. Both bikes offer minimal pedal bob so they should climb the same? On smooth terrain sure, but when going up technical and rough climbs the Yeti simply excels. Riding other bikes, it feels like the rear wheel gets hung up on rocks and roots when climbing, which is to be somewhat expected. The Yeti just seems to pull itself over them naturally. All of a sudden, I was climbing more comfortably and getting up technical descents I had yet to complete with ease. I’ve never ridden a mid-travel trail bike with such climbing prowess, the Yeti gets full marks from me in this department.

The SB130 has been described as a capable descender, but with 130mm rear travel how hard can you push it? I’ve taken this bike everywhere from Gap Creek to Tewantin and the Toowoomba DH track to find out. With a 65.5 degree head angle and 1230.2mm wheel base (large) the bike is long but not too long. I found it to be a great balance, I could ride around flowy trail and all mountain tracks without feeling like I was trying to get a dragster around corners, the bike was nimble and fun. Yet, when speeds picked up the bike was steady, giving me the confidence to hold on and push harder. Only when going flat out down the DH track did the bike start to protest mildly and give me the reality check that I needed.

Yeti’s Switch Infinity linkage handled all I could throw at the bike. Coming across a fast, rough traverse the bike held its geometry well as it used what travel was necessary, no more, no less. Braking hard for the upcoming corner the bike held its line without fault and let me brake hard before letting off the brakes, allowing the bike to accelerate through the corner. The trail wasn’t buttery smooth, it was still rough and challenging and working my arms and legs to absorb the impacts, but the bike remained in control, the only thing slowing the bike down was me. Once I learnt to trust the bike and keep off the brakes I was well rewarded with speeds that I never saw myself achieving on a 130mm travel bike. This is also a reflection of how good a coil shock is for modern trail bikes. For a small weight penalty riders can have heightened small bump sensitivity and extremely consistent suspension through out the bikes travel.

As capable and willing as this bike is though it’s not a big hitting enduro or DH bike and there were times riding this bike where I was made acutely aware of the fact. If you go long and deep off a big jump / drop and don’t eye up that smooth landing you’ll find yourself at the bottom of that 130mm very quickly. It’s not a harsh abrupt bottom out, the leverage rate of the shock makes it as smooth as possible but there’s no doubt that you’ve found the end of this bike’s travel. You can still go big on this bike, bigger than most rides will be willing to go on a trail bike. But, if you’re going to be asking all this from the SB130 its going to ask you to land precisely or endure a rougher landing than desired.

The SB130 is a leading class trail bike that allows you to push your limits on bigger terrain. There are bikes out there with longer travel that will no doubt make riding extreme, rough terrain easier. But, few blend a lively playful nature that allows you to pick lines with ease whilst also remaining steady and true in the rough of it. Turn things around are the SB130 excels upwards as well. If you seek a modern trail bike that will flourish on all mountain tracks, go hard on Enduro descents and still survive DH terrain the SB130 is worthy of your full attention. 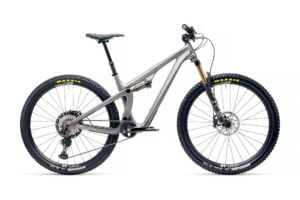 IT’S TIME TO RECALIBRATE YOUR GRAY MATTER WITH WHAT’S HAPPENING IN RACING TODAY. ALL IT TAKES IS “IT’S ON!” ­– NUMBER PLATES NOT REQUIRED. BORN TO NATURALLY CRUSH THE CLIMBS, THE SB115 IS EVOLVED. DEFT ON THE DOWNS. DESIGNED TO RACE. BUILT TO RALLY.

Hop on the Scout and you're immediately transformed into a projectile. 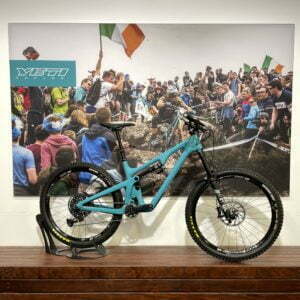 SOME SAY THE SB140 NEVER MET A DIRT IT DIDN’T LIKE. WE AGREE IN SPADES.

WHAT’S YOUR PLEASURE? DRAG A BAR. MAKE AN EDIT. STAY OUT AFTER DARK. TRY IT. LAND IT. OR JUST STAY AT IT. HAPPY TO PEDAL.

GREEDY FOR MORE. THE MAYOR OF JIBTOWN, PROUDLY WEARING THE RIP CROWN. THE SB140. DOWN TO FUN.

If, in your eyes, the winner is the one who has the most fun, the Yeti Cycles SB140 Lunch Ride is for you. With a bit more front travel than the "normal" SB140, this model is a bit more smashy-smashy. Rolling on 27.5" wheels, shod with beefy tires (for a 140mm bike) and high level componentry, this is a bike that'll make you feel like you're always in that warmed-up-but-not-cooked mode: the max fun zone. With this SB140 Lunch Ride model, Yeti has been as successful at targeting enjoyment as they are at bagging podiums. What a bike!
$8,990.00

Specialized Stumpjumper EVO EXPERT Carbon ’22 – S1 – (Sydney Stock)
Total control, unparalleled bump-eating suspension, and a fine-tunable geometry are hallmarks of the all-new Stumpjumper EVO Expert. Top it off with a build that blends quality, affordability, and durability, and it’s the perfect trail partner, no matter where those trails are, or how rowdy they get.
$10,200.00 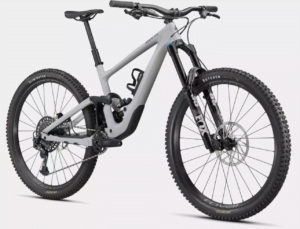 The Enduro Expert has always packed a serious punch and it's never been so true.

You get 170-millimeters of the most capable downhill performance that gains elevation with surprising ease. Full FOX suspension, powerful disc brakes, and a robust alloy wheelset round it out.
$11,500.00 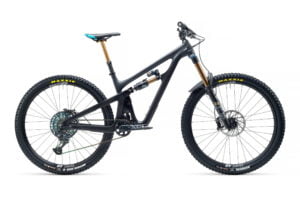 
“RACE BRED.” IT’S NOT JUST A SLOGAN PRINTED ON THE SB150 TOP TUBE. WE’VE BEEN PINNING ON NUMBERS AND PINNING THE THROTTLE SINCE 1985. SO WHEN CHOICES HAD TO BE MADE ON THE SB150, EVERY SINGLE ONE WAS MADE IN THE NAME OF UNBRIDLED SPEED. THE ULTIMATE EXAMPLE OF BREEDING A BIKE TO BEAT THE CLOCK. 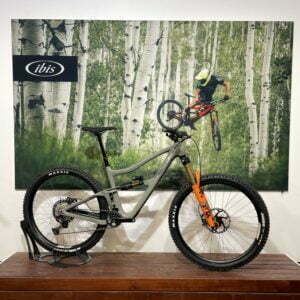 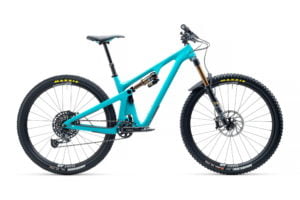 THE REBEL YELL OF THE MIDDLE CHILD. FED A STEADY DIET OF SUPER-TECH CLIMBS. THE SB130 WAS BUILT TO CRUSH THE BIGGEST TERRAIN. NO TRAIL “TOO” ANYTHING. POINT IT UP OR DOWN. ENTER A LAST-MINUTE ENDURO JUST FOR THE EFF OF IT. WE SAY NO ONE BIKE CAN RULE ALL. BUT THE SB130? ONE BIKE THAT RULES. 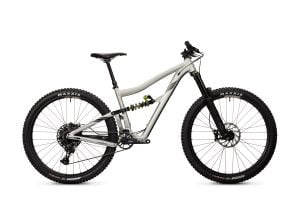 Ibis Cycles Hakka MX
The Hakka MX is Ibis Cycles answer to the Swiss Army Knife. The Hakka MX is a gravel bike. It’s also a cross bike and a road bike. We’ve logged a few bike packing trips on the Hakka too. You can outfit the bike with 27.5 mountain bike wheels, where it’ll accept up to a 2.1” tire. In 700c mode, it’ll accommodate very nicely tires from 23c to over 40c. With the hydraulic brakes being so good on CX/road/gravel bikes now, coupled with the ability to run big-volume big-traction tires, this bike is a total blast on dirt (especially fast flowing singletrack).
$6,300.00 – $8,390.00 Read more

Transition Patrol Carbon X01 Coil Complete Large [MLB STOCK]
The Patrol is the bike that defines us as a company and our most popular model to date. After winning bike of the year in 2016 for Pinkbike and 2017 for VitalMTB, the Patrol has a pedigree that sets the bar for what a modern mountain bike should be. It doesn't curve to one side too far, instead, it truly does everything extremely well. A true big mountain rig that can hang at bike parks and DH tracks and then settle into an epic long death march into the backcountry. The Patrol simply won't flinch at any trail going up or down. It may have you scratch your head as to what it is truly designed to do but we would rather not over think it and just let the bike take you wherever you want to go.
$9,490.00 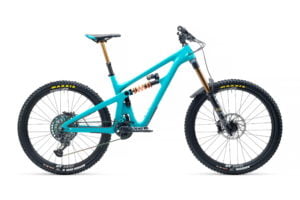 MASTER OF THE GNARNIVERSE. BOLD CLAIM. THE SB165 WAS CREATED TO GET AFTER WHATEVER YOU’RE GETTING AFTER.

THE SLACKEST SLED IN OUR LINEUP. WITH KINEMATICS TUNED FOR A COIL-SHOCK. AT HOME OUTSIDE THE TAPE AND TRUSTED ON THE LINES WHERE MISTAKES CAN’T HAPPEN.

THE SB165 ALREADY HAS YOU COVERED.

Specialized Stumpjumper EVO EXPERT Carbon ’22 – S3 – (Sydney Stock)
Total control, unparalleled bump-eating suspension, and a fine-tunable geometry are hallmarks of the all-new Stumpjumper EVO Expert. Top it off with a build that blends quality, affordability, and durability, and it’s the perfect trail partner, no matter where those trails are, or how rowdy they get.
$10,200.00

Our greatest hits compiled into one bike—just hit play.

If ever a bike resembled your most cherished mix tape compilation, the Hightower is it.  Featuring our lower-link mounted shock design, updated, adjustable geometry, this “Engineering Best Of...” assembles some of our biggest design pleasers into one belter of a road-trip companion. The Hightower has been a does-it-all-well trail bike since its inception. More maneuverable than its longer-travel sibling, the Megatower, and more at home in the steep-and-chunky than its snappy cousin Tallboy, Hightower excels when the route covers ‘all points in between,’ and descents come courtesy of some big-ass climbs. The VPP suspension’s lower-link-mounted shock creates a nearly linear leverage curve, meaning it mops up bumps of all sizes and maintains the kind of progressivity normally reserved for our V10 DH bike!
$12,990.00